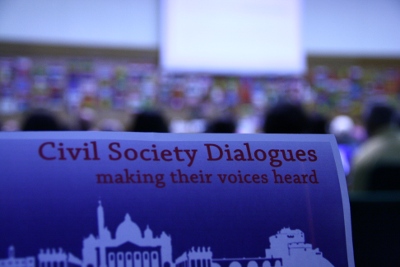 The first round of Technical Consultation on International Guidelines on Securing Sustainable Small Scale Fisheries (SSF Guidelines) was held at the headquarters of the Food and Agriculture Organization of the United Nations [FAO] in Rome, Italy from 20-24 May 2013.

Small-scale fisheries have been firmly on the FAO agenda since the Global Conference on Securing Sustainable Small Scale Fisheries in the context of Food Security and Poverty Eradication in 2008, in Bangkok, Thailand, or the Bangkok Conference. WFFP played and important role in this. This led the Committee of Fisheries (COFI) of FAO to decide at their 29th session in March 2009, for an international instrument on small-scale fisheries to complement the Code of Conduct for Responsible Fisheries.

Four regional conferences were held in Asia, Africa, Pacific, Caribbean and Latin America by FAO. Twenty national consultations and two regional consultations were, in turn, conducted by civil society organizations, led by World Forum of Fisher Peoples’[ WFFP], World Forum of Fishworkers and Fish harvesters[WFF] and International Collective of Supportive of Fishworkers[ICSF]. More than 2,300 people participated in these consultations. These consultations were able to bring the rich experiences of the fisher folk and their organizations to make the Guidelines more inclusive, integrated and adhering to a bottom-up approach.

The civil society has been pushing the small scale fisher communities’ agenda forward since 1984, when FAO convened a global conference on fisheries: World Conference on Fisheries Management and Development. “At that time small-scale fishers and fishworkers were not allowed to participate in the conference. We are happy to see that today the FAO has taken up the small scale fisher people’s agenda. We do hope this is a great victory of Small Scale fishers, who are the most marginalized and vulnerable within the fisheries sector. Their concerns were then not heard at FAO level and now we are in the negotiations table, which is our first victory in the process,” said Andrew Johnston, a fishermen leader, representing Artisanal Fisher folk Association of South Africa and WFFP.

Chandrika Sharma, the Executive Secretary of International Collective of Support of Fishworkers,[ICSF], said “The process of developing these Guidelines has been highly consultative. It has been able to bring the views, concerns and pressing needs of the fisher folk communities from across the world.”

As far as the Civil Society groups are concerned, it is a big achievement that these Guidelines, though voluntary in nature, are to be based on the human rights approach.

“It is a great victory of small scale fishing communities that the States are agreeing to adopt a Human Rights approach. The States cannot easily neglect the human rights of their citizens and we look forward to the time when the instrument will be finally adopted, hopefully by 31st session of COFI, June 2014”, Naseegh Jaffer, director of Msifundise Trust and the co-coordinator of the WFFP shared at the Civil Society Dialogues held at FAO.

Governance of the tenure and resource management; Social development, employment and decent work; value chains, post harvest and trade; gender equality; and, disaster risk and climate change are the main subject areas of the Guidelines. These are some of the most important aspects of food security and poverty eradication of the small scale fishing communities.

“We feel some of the contents of the Guidelines and the decisions we arrived at so far are important for the future of the fishing communities, their livelihoods and sustainable fisheries. But, while participating in these negotiations, we felt that some of the governments are more concerned about industrial fishing and do not pay genuine interests to secure and sustain small scale fisher people. We urge all States to allow fisher people to continue their fishing in coastal and inland areas and to not evict them in the name of development programs such as tourism, Special Economic Zones, Power generating plants in the context of neo liberal globalization”, says Rambhau Patil, Chairperson of the National Fish Workers Forum, India and WFFP.

Some discussions were tense as some States were strongly opposed to recognize and respect the traditional and customary rights of the fisher people. Recognition of the informal nature of the fisheries was also highly opposed by some of the States. Fisher leaders represented at the negotiations were totally disappointed about the opposition and raised their concern about it.

“Customary rights of the fisher people should be respected by the States. The coastal lands and water bodies, those utilized by the fishing communities should be preserved with due recognition. But, we did not see this happen at the negotiations as some of the States totally opposed them”, narrated Narendra R. Patil, General Secretary of Maharashtra Machchimar Kriti Samiti in India, and WFFP.

Recognition of Indigenous fishers, specifically in developed countries, was also a big concern of the civil society actors who attended the negotiations. The Guidelines though global in nature, have a special focus on developing countries.

Sherry Pictou representing Mi‘kmaq, Bear River First Nations, Canada and the Co-coordinator of WFFP narrated her frustrations over the process. “What will happen to the indigenous people and small scale fisher people in developed countries? We are being excluded and are not assured of our fishing rights in the developed world. These are our concerns and we strongly advocate for the rights of indigenous people and small scale fishers in the developed world.”

Small Scale Fisher leaders emphasized that the small scale fisher communities depend on coastal and inland water bodies and adjacent lands mainly for their livelihoods and not for any profit making. If they lose these water bodies, their life, livelihoods and the future will be destroyed. So, they advocated to give the fishing communities the recognition that is due them and on equal footing as other groups like the industrialists, private sector etc. They also stressed that national policies should reflect and comply with the international policies.

“So far we are not treated equally important as other sectors though we are the vulnerable, most marginalized in the fisheries sector. We need further attention through national processes, including those on adopting national legislations to empower small scale fishing communities”, says Margaret Nakato, Chairperson of Katosi Women Organization, Uganda and the Executive Director of WFF.

There were a number of grass root fisher leaders, representing national fisheries organizations, who attended the negotiations. Ramida Sarasit is one woman leader among them, from the Southern Thai Fisher folk Federation, Thailand and WFFP. Her sentiments were as follows:

“I feel we have not gained much from the Guidelines. Most of the States, as far as I see, are not ready to respect the rights of small scale fisher communities. Day by day we are losing our rights, our coastal and inland water bodies, our livelihoods. We cannot see any progress unless States pay serious attention and address the root causes of our issues.”

“We need more and more collective actions as civil society. At the negotiations we are the most organized group at table. We need to continue this unity even in the future”, said Maria Jose at the civil society group meeting.

One of the major concerns of many fisher leaders was the States’ commitment to the Guidelines they are expected to adopt and to implement voluntarily. There are many international instruments adopted at FAO, in relation to food producers, the future and sustenance of the resources. The Right to Food guidelines, the Tenure Guidelines on Land, Fisheries and Forests and now SSF guidelines that could be adopted in June 2014. The States’ commitment to internalize those Guidelines and adopt national regulations and legal mechanisms are important steps to make sure these instruments will help to empower the marginalized and vulnerable communities, in this case small scale fishing communities.

Cairo Laguna, Chairperson of Nicaraguan National Fisheries Federation and the president of WFF, increased the hope of the civil society group at least in the Latin American region. They have vowed to get their States to take serious account of the Guidelines within fisheries legislation.

“We will not allow our States to lose the momentum. We will pressure our own States to keep their word and commit to empower small scale fisher communities while achieving the objectives of the Guidelines.”

This is the hope for future. The Civil Society groups felt that they all have big role to play back home.

“How to get the support from Small Scale Fishers friendly States and work through them to minimize the opposition coming from some strongly opposing States are our challenges ahead. We need to strategically work with them to convince them to take the SSF agenda forward. We should begin to do our home work.”

The fisher communities’ representatives dispersed with a hope for the future. They have agreed to do their home work with their own States to bring the SSF agenda forward, in preparation for the next round of negotiations, and for concrete and context-specific implementation of the Guidelines once they are adopted. This is their journey which began way back in 1984 and which was strengthened through civil society coalition work.

At the opening session of the technical consultation of the SSF Guidelines, Zoila Bustamante Cardenas, of CONAPACH, the Chilean National Fisher folk Federation raised her strong stand and hope for future.

“For us, the process of developing these guidelines represents an important milestone by adopting an inclusive approach to small scale fisheries. An approach which places equal emphasis on social development, the human rights of fishing communities and the responsible governance of the fisheries on which their food security livelihoods and well being depends.

We welcome the visibility the guidelines give to women and the serious way in which they address gender issues. The guidelines have also taken the unprecedented step of addressing as a whole the different aspects of SSF from the perspective of governance, production, trade, labour and quality of life. We all are concerned and hope our States care for Small Scale Fisher People and ensure their rights as Human Beings.”